A Swedish National Audit Office audit shows that it is common for official decisions to be made by computers, called automated decision-making. In most cases, this leads to increased efficiency and legal certainty, but not always. Errors that arise can have major consequences for individuals and reduce confidence in public administration.

The Swedish NAO’s conclusion is that the automation of these decision-making processes has led to reduced costs for the agencies and shorter waiting times for individuals. Legal certainty, in the form of increased equality and predictability, has also improved.

However, the Swedish NAO notes that there are deficiencies when it comes to ensuring that the automated decisions are correct.

“Our assessment is that the authorities have put too much focus on low costs and too little on control and follow-up,” says Auditor General Helena Lindberg.

This means that the agencies do not have an adequate framework to detect incorrect decisions, which can have major consequences for private individuals and businesses and risk reducing confidence in public administration.

“The problems are not due to new technology; these agencies have had automated decision-making since the 1980s and have established methods of managing such decision-making processes. Despite this, the controls and follow-up are inadequate," says Linda Talme, project leader for the audit.

The agencies audited need to follow up on the automated decisions to ensure that they are correct, and improve the work of handling cases with a high risk of fraud and errors.

Other important measures are to ensure that equivalent cases are treated equally and that the documentation of automated processing is clear and readable.

The Government should instruct the Swedish Agency for Digital Government to create better conditions for effective and efficient, legally certain and correct automated decisions.

The Swedish Social Insurance Agency, the Swedish Tax Agency and the Swedish Transport Agency should follow up their automated decisions to ensure that they are correct.

The Social Insurance Agency, the Tax Agency and the Transport Agency also receive a number of separate recommendations. 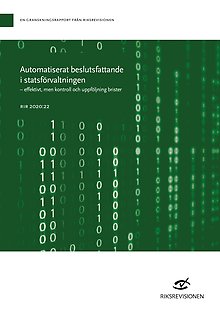