The Government overestimates future revenues from energy and environmental taxes

The Government’s calculations of future revenues from energy and carbon taxes do not take sufficient account of the major changes taking place in the climate and energy area. This means that these revenues risk being overestimated and that the assessment of the long-term sustainability of public finances may be misleading, according to the Swedish National Audit Office’s audit.

One of the Government’s main tasks is to pursue a fiscal policy that leads to long-term sustainable public finances, so that welfare can continue to be financed in the future.

Revenues from energy and carbon taxes make significant contributions to public finances. In addition to contributing money to the treasury, taxes are also important policy instruments in energy and climate policy.

The Swedish NAO’s audit shows that the Government’s long-term calculations do not take into account that revenues from energy and carbon taxes gradually decrease when people choose energy-efficient and climate-adapted alternatives for travel, transport and heating – and that tax revenues are thus overestimated.

With current tax rules, the overestimation becomes apparent in 2024, and then gradually increases. In 2050, tax revenues are overestimated by about half a per cent of GDP, according to the Swedish NAO calculations. This corresponds to around SEK 25 billion per year, measured in terms of current GDP and monetary value.

When revenue decreases, there is a need for increased funding so that public finances do not deteriorate. This may involve higher taxes, lower expenditure or increased borrowing.

“The time perspective is long and both tax rates and tax bases can change over time. However, the overly optimistic view of future revenues from energy and environmental taxes risks giving a misleading picture of public finances and the scope for future reforms,” says Auditor General Helena Lindberg.

Obtaining as good a picture as possible of future revenues from energy and carbon taxes requires appropriate scenarios for energy use.

“The assessment of the long-term sustainability of public finances must take into account all significant demographic and economic changes that can reasonably be foreseen. The model used by the Government does not identify perhaps the most important issue of our time – developments in the area of climate and energy – and needs to be developed," says Tomas Forsfält, project leader for the audit. 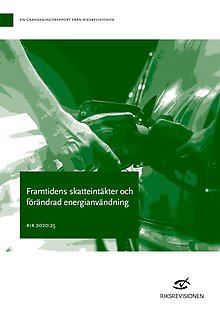