To make it more attractive for employers to have older employees, the special payroll tax for people over the age of 65 in Sweden was reduced in 2007.

During the period 2007–2019, lower payroll tax for older people has cost the central government SEK 33 billion in lost tax revenues. From 2020 onwards, tax expenditure is expected to grow to SEK 7 billion/year.

The Swedish NAO’s audit shows that the Government’s inadequate reporting makes it difficult to determine if the tax reduction has contributed to increased employment among older people.

There are several reasons for this. The special payroll tax has changed several times, which may have created uncertainty among employers and employees. This in turn may have affected the effects of the tax cut. When the tax was abolished for the first time in 2007, several other reforms were implemented, making it difficult to distinguish the effects of the abolished tax.

The Swedish NAO notes that there are signs that older people work more today than before, even without targeted tax relief. In such cases, the abolished tax has subsidised an increase in employment that would have taken place anyway.

“The Riksdag decided on the tax cuts on the basis of inadequate documentation, and it is largely uncertain whether they have had the intended effect,” says Auditor General Helena Lindberg.

The Swedish NAO thus notes that there is a high risk that significant amounts of public funds have been used ineffectively – money that could have provided better benefit in other ways.

“In order to be able to assess whether the targets that the Riksdag supported were achieved, the reduced payroll tax for older people needs to be monitored and reported in a clear and appropriate way,” says Anneli Josefsson, project leader for the audit.

The Swedish NAO recommends that the Government clarifies how reported tax expenditure changes when rules for special payroll tax for older people are amended. In addition, the Government should monitor and evaluate in particular any employment effects after 2019, when the tax was completely abolished. 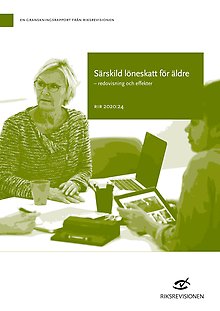