In December, the Swedish National Audit Office published an audit of the Governments initiatives against labor exploitation. The audit revealed that the work against exploitation of labor in Sweden has major shortcomings. The National Audit Office's main critique is that the Government has not given the authorities clear assignments and mandates to work with the issue. This is noticeable in practice by the meager number of employers convicted of the crimes trafficking in human beings for forced labor and human exploitation. There are only three convictions in the last 15 years.

The audit will be presented in a webinar 10th of February at 14.00-15.30. The National Audit Office has invited representatives from the United Kingdom and Finland to get a picture of how these countries work against labor exploitation.

The webinar will be held in English. 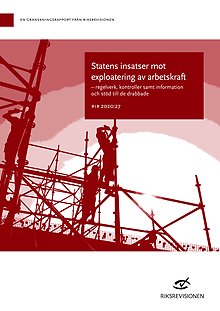