The Government has taken measures to improve administrative efficiency at central government agencies. However, the Swedish National Audit Office’s (Swedish NAO) audit shows that the measures have only had limited effect, and that the Government should intensify its work – for example by enabling increased coordination.

The administrative policy objectives, which the Riksdag has supported, include having a good balance between core and support activities, where the administration’s role, among other things, is to ensure that the agencies comply with laws and regulations and have good control over their operations.

The agencies spend considerable resources on their administration, and the Government has implemented several measures to achieve efficiency improvements. One example is the establishment of the National Government Service Centre, which, among other things, deals with payroll management for many central government agencies.

However, the Swedish NAO’s audit shows that the Government’s measures as a whole have only had limited effect, and that there are clear indications that administrative work is growing faster than the core activities.

The Swedish NAO considers that improved coordination is one of the tools that could be used to increase efficiency in the administration of central government activities.

“One revealing example is that the agencies have had to deal with the changes entailed by the introduction of the Data Protection Act (GDPR) on their own. More coordination would probably have contributed to more efficient use of resources here," says Henrik Allansson, project leader for the audit.

The audit also shows that funds released when simple administrative tasks within the agencies are made more efficient are used for more qualified administrative support rather than for more core activities. 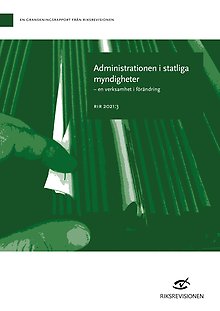