Ineffective use of project grants to strengthen emergency preparedness

Each year, central government distributes around half a billion kronor to government projects that are to strengthen Sweden’s emergency preparedness and civil defence. The Swedish National Audit Office’s (Swedish NAO) audit shows that there is a risk that the project grants will be used for regular activities and therefore will not be the reinforcement that was intended.

The Swedish NAO’s audit shows that there is a high risk of such project grants going to activities that are actually to be financed by the agencies’ ordinary appropriations.

“There are indications that many agencies mainly fund their emergency preparedness work with the help of project grants. That is not how the system was intended to work. If the Government wants to continue using temporary project grants, it should consider making changes," says Mikael Halápi, head of the Swedish NAO’s Performance Audit Department.

The agencies themselves state that project grants are important and enable interventions that otherwise would not have happened. However, funding the agencies’ preparedness work with temporary project grants has a number of negative side effects, including that

In addition to temporary project funding, since 2015 the County Administrative Boards can also apply for funding of so-called coordinated projects.

“Project grants now constitute more or less permanent co-financing of the County Administrative Boards’ basic emergency preparedness work. It is at odds with what the Government and the Riksdag originally said that the grant should be used for," says Daniel Bjerstedt, project leader for the audit.

The Swedish NAO also notes that there is a problem of legitimacy in that the Civil Contingencies Agency (MSB) has been given responsibility for allocating the grant to applicant agencies, while MSB also funds parts of its own activities with money from the same appropriation.

If the Government wishes to continue to use the appropriation for temporary special initiatives to strengthen national emergency preparedness and civil defence, the Swedish NAO recommends that the Government, among other things, 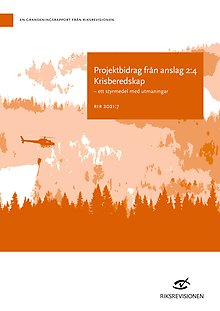