Property formation at Lantmäteriet is slow, with high and unpredictable fees

The Lantmäteriet property formation activities are ineffective, with long processing times and high, unpredictable fees. The Swedish National Audit Office recommends a review of the entire regulatory framework and the current fee model.

The Swedish National Audit Office (Swedish NAO) has audited central government property formation at Lantmäteriet. The audit shows that there are major problems of effectiveness and efficiency. For example, processing times are very long – and have become even longer during a long time.

The problems are mainly due to difficulties in recruiting enough surveyors.

The Swedish NAO considers that it is not possible to increase the number of surveyors sufficiently within reasonable time, and recommends that the Government conducts an overview of the regulatory framework to make the activities more efficient.

“Processing can be made simpler and speeded up. However, outdated legislation prevents digitalisation, for example using digital coordinates rather than poles in the ground. Introducing automated decision-making for some cases is another important step,” says Auditor General Helena Lindberg.

In addition, the audit shows that the fees that Lantmäteriet charges to conduct property formation are high and have increased at a very high rate. The Swedish NAO considers that this is mainly due to the fee model used by Lantmäteriet.

The fee model is defined by the fact that Lantmäteriet enjoys monopoly status, full cost coverage is to apply, the fees are determined based on an hourly rate and Lantmäteriet may both decide on and keep the fees.

“Within public administration, this is an almost unprecedented degree of freedom, which means that Lantmäteriet lacks clear incentives to improve cost-effectiveness,” says Ingemar Delveborn, project leader for the audit.

Furthermore, the fee setting at Lantmäteriet makes it difficult for people – largely private individuals – who have cases at the agency, to understand in advance how much a procedure will cost. More and more people appeal their invoices to the Land and Environment Court, where the fee is reduced in more than one in ten cases. The reduction varies from a few hundred Swedish kronor to tens of thousands of kronor.

The Swedish NAO’s recommendations to the Government include the following:

The recommendations to Lantmäteriet include: 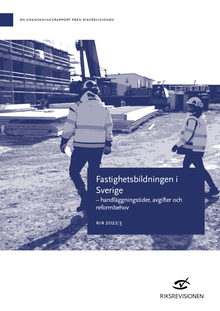