The handling of asylum cases by migration courts is characterised by long processing times and large regional differences. Lack of resources is the main reason, according to the Swedish National Audit Office’s (Swedish NAO) audit.

The court system took over the handling of appeals in migration cases from the Aliens Appeals Board in 2006, and migration courts were established in Gothenburg, Malmö and Stockholm. In 2013 a Migration Court was also established in Luleå.

The Swedish NAO has audited the migration courts’ processing times during the period 2013-2020. The audit shows that processing times have increased sharply from 2016, and that this is mainly linked to a large increase in the number of asylum cases.

However, the processing times vary between the different courts. The Government’s target is that 90 per cent of all asylum cases should be completed within four months, but in Gothenburg this takes as much as 28 months (in 2020). In Malmö it takes 20 months, in Luleå 12 months and in Stockholm 6 months.

The audit also shows that the cases often remain dormant without any processing pending an oral hearing. Here too, there are big differences: In 2020, the average waiting period at the court in Gothenburg was more than two years, in Malmö just over a year, in Luleå just over six months and in Stockholm slightly less than that.

The Swedish NAO notes that the long processing times, and the differences between courts, are mainly due to external circumstances that are difficult for the courts to influence.

This is partly a matter of a high influx of cases into the courts and the differing degree of complexity of the various cases. But it is also related to such basic things as the lack of suitable premises, difficulties in adapting the size of the operations to the number of cases received, and resource increases that the courts have had difficulties in making use of.

The Government has taken steps to move cases from courts with heavy case loads to courts with smaller loads, and the National Courts Administration has established a backup force that can help heavily burdened courts.

Regardless of this, the processing times at the four migration courts in the country are far too long, and the courts have little scope to remedy this on their own.

“It is clear that the combined resources of the migration courts are not sufficient to achieve the Government’s target. There is also a need to review the allocation of resources between courts," says Daniel Melén, project leader for the audit.

The Swedish NAO recommends that the National Courts Administration ensure that an uneven allocation of resources between migration courts is avoided. This can be done, for example, by developing the forecasting work and by considering offering backup force resources more extensively to those migration courts whose results are furthest from the Government’s target.

The Swedish NAO recommends that the Government ensure that the conditions of the migration courts for long-term competency management match up to the Government’s target of settling 90 per cent of asylum cases within four months. 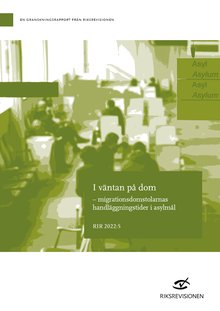