The model used by the State to increase agencies’ appropriations means continuous savings of approximately SEK 1 billion per year. It forces efficiency improvements without the agencies finding it significantly more difficult to fulfil their remit, according to the Swedish National Audit Office’s (Swedish NAO) audit.

Central government agencies’ appropriations are increased every year to compensate for increased costs, such as wages and rents. The model used for this, called the price and wage recalculation, includes a productivity deduction of approximately 0.6 per cent.

In practice, this means a reduction in the appropriation compared with the previous year (all else being equal). The aim is to create incentives for agencies to improve efficiency.

The Swedish NAO’s audit shows that this generally works as intended, without significant negative consequences for the agencies’ ability to fulfil their remit or recruit the right skills – something that has been feared.

“The price and wage recalculation has created budgetary space for the State averaging SEK 1 billion a year. Money that the Government has been able to use for other priorities,” says Auditor General Helena Lindberg.

However, several of the agencies included in the audit consider that the way in which the price and wage recalculation is performed is unpredictable and hampers long-term planning. The Swedish NAO notes that the Government has addressed several shortcomings in this area, but that transparency can still be improved. For example, neither the Budget Bill nor the central government accounting system show how much the deduction is per agency.

“The possibility for the price and wage recalculation to contribute to the management of shared resources would probably increase if the agencies had full insight into how the system works and its consequences for their finances," says Bengt Lewin, project leader for the audit.

The audit also shows that the effects of the price and wage recalculation are less noticeable for agencies that finance their activities in whole or in part with fees, rather than with appropriations. One of the Swedish NAO’s recommendations to the Government is therefore to investigate the possibility of introducing a similar system also for central government activities financed through fees. 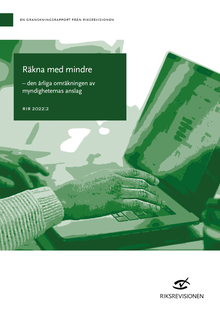 Calculate for less – the annual recalculation of agencies’ appropriations (RiR 2022:2)