The sharply increasing occurrence of digital medical consultations and agency locum doctors in primary care may impair the ability to assess the patient’s working capacity, which in turn could lead to increased costs for the sickness insurance system.

The Swedish NAO has therefore audited whether the control function in the sick-listing process works effectively, and whether the Social Insurance Agency and the Government have managed the risks of impaired ability to assess working capacity and hence increased costs.

The audit shows that medical certificates issued on the basis of a digital medical consultation more often lack information that should normally be included compared to certificates issued after a physical medical consultation. This applies, for example, to information about the doctor’s own assessment and what that is based on, as well as the doctor’s own observations.

“It is good that digitalisation increases the accessibility of healthcare. However, if digital medical consultations lead to negative side effects, the Government and the Social Insurance Agency need to take action,” says Auditor General Helena Lindberg.

The Swedish NAO notes that there are currently no national guidelines for issuing medical certificates based on digital medical consultations. One consequence of this is that different regions have developed their own procedures, which risks leading to varying application of sickness insurance.

The audit also shows that the use of agency locum doctors at health centres had some impact on the uniformity of the assessment of working capacity, in cases where the individual applies for an extension of the sick-listing period.

“The emergence of digital medical consultations and agency locum doctors in primary care poses risks to both uniformity and level of use of sickness insurance. It is very important to follow the application and cost development of sickness insurance," says Pathric Hägglund, project leader for the audit.

The Swedish NAO therefore recommends that the Government take the initiative to develop national guidelines concerning the issue of medical certificates based on digital medical consultations.

The Swedish NAO recommends that the Swedish Social Insurance Agency: 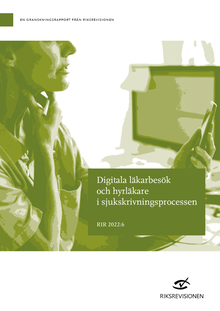