Sida needs to be better at presenting important priorities for its activities to clarify what justified the choice of partners in different development aid projects. At the same time, the Government’s governance needs to be clearer and more focused, the Swedish NAO audit shows.

The Swedish International Development Cooperation Agency (Sida) distributes about SEK 26 billion annually in international development cooperation. The major part goes to development cooperation contributions carried out by other actors. The Swedish National Audit Office (NAO) has therefore audited whether the Government and Sida have created the conditions necessary for effective choices of partners and aid modalities, and whether Sida’s choices were informed.

The audit shows that Sida’s internal governance and support mainly function well, but that the overarching choices and priorities that lie behind a large proportion of Sida’s choices of partners and aid modalities are unclear.

“It is not possible to know in retrospect why Sida chose these particular contributions, partners and aid modalities. Many of Sida’s choices have thus not been sufficiently informed,” says Vanessa Liu, project leader for the audit.

The Swedish NAO assesses that Sida needs to clarify and document its choices and priorities in order to enable effective choices in the future. It would also improve the prospects for follow-up and learning.

Furthermore, the audit shows that the strategies on development cooperation decided by the Government are comprehensive and include many different policy signals. For example, the different areas of support often include several different themes, while the strategy objectives sometimes consist of several objectives in one. In addition, sometimes the Government includes further policy signals at different levels. All in all, it makes Sida’s work difficult.

The conclusion of the Swedish NAO is that the Government should delimit the areas of support, reduce the number of objectives in the strategies and formulate the objectives at an overarching level. This would give Sida more scope to adapt implementation of the strategies based on its own assessments.

“This should ultimately increase Sida’s capacity to use its resources effectively,” says Auditor General Helena Lindberg.

The Government is recommended to ensure clearer and more focused strategies by:

Recommendations to Sida include presenting and justifying the overarching choices and priorities that are made to support the strategy objectives.

Sida should also ensure that lessons from previous contributions are taken into account, in particular in the choice of new partners and aid modalities.

See the report for full recommendations (summary available in English). 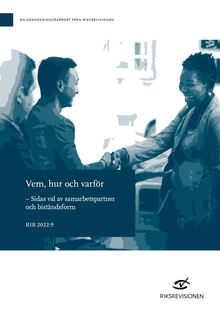