Preparatory and orientation training – follow-up of participants in the introduction system (RiR 2018:12)

Almost 40 per cent of participants in preparatory training for newly arrived immigrants have left the Swedish Public Employment Service (PES) after four years. Of those fewer than one in three has a job, but many of them were neither working nor participating in labour market measures. Among those who are registered with the PES after four years, almost one in four has some type of employment. 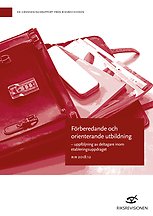