Central government appropriations to develop the transport infrastructure amount to more than SEK 30 billion per year and will increase. The Swedish National Audit Office (Swedish NAO) has audited whether the Swedish Transport Administration’s cost estimates constitute reliable decision support to enable efficient prioritisation of infrastructure projects. The audit examines whether there are systematic cost deviations in investment operations, whether the Transport Administration’s work on cost control and estimates provides reliable decision support, and whether cost increases lead to re-assessment of previous investment decisions.

The audit shows that there have been substantial cost increases between the latest national intermodal plans for transport infrastructure. At the same time, it is very rare for the Government to stop a project once it is in the national plan. This is despite the fact that the possibility to reassess an earlier decision when new information is added is a fundamental idea of the Swedish planning system. The Swedish NAO also considers that the Government and the Transport Administration are deficient in transparency by not compiling and communicating the scope of cost increases. 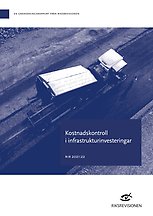