Need to improve cost-effectiveness in the use of medicines

In 2020, the cost of medicines within the pharmaceutical benefits scheme amounted to approximately SEK 34.3 billion, including patient fees. The Government and the Dental and Pharmaceutical Benefits Agency (TLV) can do more to get the most possible health for the tax money that the public sector spends on medicines, according to the Swedish National Audit Office’s (Swedish NAO) audit

Prescription medicines are subsidised by tax revenues and are covered by the patients’ high-cost threshold scheme. The Dental and Pharmaceutical Benefits Agency (TLV) is the agency that decides on which medicines should be included in the pharmaceutical benefits scheme.

The Swedish NAO’s audit shows that the model Sweden uses for these decisions makes it difficult for TLV to include certain new medicines in the benefits scheme. This applies above all to medicines for severe and unusual diseases that need continuous treatment.

“In the worst case, this leads to patients being denied a new medication, even though the treatment effect is good,” says Ulf Andersson, project leader for the audit.

In order to address this, the Swedish NAO recommends that the Government initiates discussions with the pharmaceutical industry and the regions in order to achieve, among other things, a developed price model, where, for example, price reductions on older medicines leave room for subsidies of newer and more expensive preparations. The discussions should also concern the regions’ responsibility for cost-effective use of medicines.

“Pharmaceutical benefits involve very large amounts every year. More should be done to get the most health for the tax funds that are invested in medicines," says Auditor General Helena Lindberg.

The audit also shows that due to secrecy regulations, TLV has limited access to relevant databases held by other agencies, and that this complicates TLV’s efforts to monitor the use of medicines and its effects. In addition, the content of the databases needs to be developed.

The Swedish NAO also notes that it is relatively common for doctors to prescribe medicines with a subsidy despite the fact that the product should not be subsidised for the area of use in question. This means that tax revenues are spent on the use of medicines that TLV does not consider to be cost-effective.

In summary, the audit shows that there are unused opportunities to improve the cost-effectiveness of the use of medicines.

The Swedish NAO recommends that the Government initiates discussions between central government, industry and the regions in order to reach agreements that can, among other things, enable a developed price model for new and old medicines.

The discussions should particularly focus on

The Government should also ensure that TLV is able, as far as possible with the data available, to conduct a systematic follow-up of the use of medicines and the effects of the treatments.

See the report for the full recommendations. 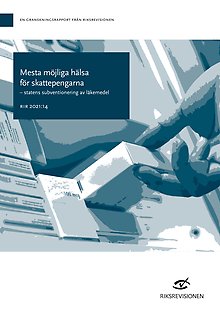