The municipal property charge and the targeted government grants have different purposes and aim to strengthen municipal finances in different ways.

However, there are shortcomings. Municipalities with a small population to a lesser extent receive targeted government grants, which is not consistent with the objective of equal economic conditions.

“The Government should review the design for grants that are difficult to access for smaller municipalities,” says Auditor General Helena Lindberg.

The audit also indicates that the role of the municipal property charge as a municipal source of revenue should be investigated. The charge was introduced when the property tax was abolished in 2008, but no clear purpose was specified by the Riksdag and the Government.

The Government stated that the charge would incentivise municipalities to stimulate activities such as housing construction. However, increased tax exemption for newly built housing weakened this incentive. There are major differences in municipalities’ revenue from the property charge, largely due to the number of single-family houses in each municipality when the charge was introduced.

“If the purpose of the charge is unclear, it also makes it difficult to understand the grounds on which the funds are allocated. A review should be carried out here,” says Anna Brink, project leader for the audit. 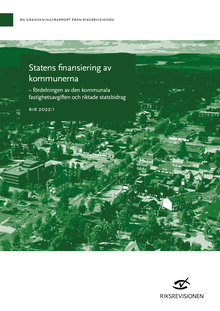