The Government’s regional development policy too unclear, short-term and fragmented

The Government’s regional development policy has not been evaluated in more than 20 years. The Swedish National Audit Office (NAO) audit shows that it is characterised to a large extent by ambiguity, short-sightedness and lacking a holistic approach – and that at an overall level, it is not possible to know whether the goals have been reached.

The Riksdag’s objective for regional development policy is defined as “development capacity with strengthened local and regional competitiveness for sustainable development in all parts of the country.” The Government has produced several national strategies to achieve these goals; the most recent strategy was decided in 2021 and runs until 2030.

The Swedish National Audit Office (NAO) has audited the Government’s organisation, governance and follow-up of regional development policy. The audit shows that the Government has implemented a number of improvements, but that this has proven insufficient to create sound conditions for effective cohesive government action.

“The Government’s initiatives at an overall level have been too unclear, short-sighted and lacking a holistic approach. This has made implementing the policy difficult, as well as the prospects of evaluating it,” says Auditor General Helena Lindberg.

The Swedish NAO further notes that regional development policy has not been evaluated in the past 20 years, and that it is currently not possible to overview the extent to which policy objectives are met.

At the national level, it is difficult to get an overview of the overall scope and financing of regional development policy, and how different initiatives are related.

“This makes it difficult to coordinate and evaluate the pursued policy. It also impairs the regions’ basis for managing responsibility for regional development,” says Peter Jörgensen, project leader of the audit.

Furthermore, the Government should task the Swedish Agency for Economic and Regional Growth with following up the implementation of the National Strategy for Sustainable Regional Development Throughout the Country in 2021–2030.

See the report for full recommendations (summary available in English). 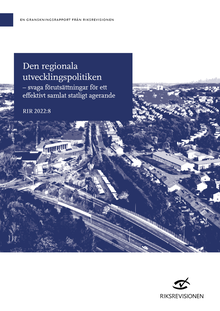