At the end of the 2016-2020 defence period, the Defence Commission, the Government and the Swedish Armed Forces stated that efforts to strengthen the operational capabilities of the armed forces had not reached as far as intended. Against this background, the Swedish National Audit Office (Swedish NAO) has examined whether the Government and the Swedish Armed Forces have carried out effective work to increase the operational capacity of the army forces during the 2016-2020 defence period. 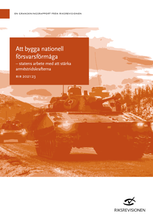