The metropolitan agreements negotiated by the National Negotiation on Housing and Infrastructure, signed in 2017, meant that central government co-financed public transport investments in the three metropolitan regions. In return, the municipalities in the regions undertook to build new housing. The Swedish National Audit Office (Swedish NAO) has audited whether the Government has ensured that the central government co-financing of regional public transport infrastructure within these agreements has been in line with the Riksdag’s transport policy objectives, where the choice of measures is based on transport needs and the national economy. 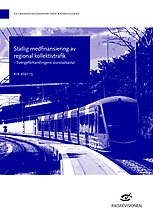