The Swedish National Audit Office (Swedish NAO) has audited Sweden’s participation in the 2018 PISA survey, with a focus on exclusions and student non-response. Exclusions refer to students selected to sit the assessment tests but who were excluded from participating due to disabilities or limited language proficiency. Student non-response refers to students that do not turn up to the test.

The audit shows deficiencies in the National Agency for Education’s (NAE) follow-up work regarding exclusions and how the Government and the NAE have dealt with the doubts that have arisen. The Swedish NAO considers it serious that neither the Government nor the NAE has convincingly followed up on the suspicions of implementation errors raised by both media and the Riksdag Committee on Education. The NAE, the OECD and the Government have argued that Sweden’s low participation level in the PISA survey was due to the inflow of migrants in the years before the tests were carried out. The audit shows that this is not a valid explanation. The NAE’s decision to no longer report the reasons for exclusion separately has made it more difficult to follow up erroneous exclusions.

Since the results of the PISA survey are used as a target indicator in many contexts, including in the Budget Bill, it is important that the results are reliable. If the PISA survey is not carried out reliably, it may have consequences for both educational policy and confidence in public administration. 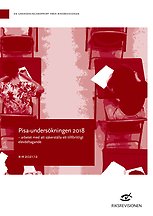